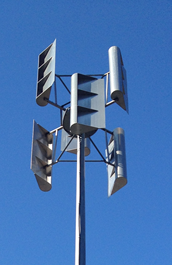 The VBINE unit was installed at BCIT in 2011 and was operational for 9 months before it was disconnected from the electrical grid. Although there is no official confirmation from the OEM (which has gone bankrupt), BCIT was concerned about potential failure of the mechanical arms connecting the turbine blades to the direct drive disc.

BCIT tasked Team 01 to analyse and potentially redesign the mechanical arms of the VBINE. Through the use of computational fluid dynamic software the team was able to determine the wind loading on the turbine blades and thus the force distribution in the mechanical arms themselves. Several concepts were then drawn up and compared to one another; during this process the team determined that reinforcement of the existing arms was the best course of action. Once the team had a finalized concept, we were able to move forward through the detailed design phase. Finite Element Analysis (FEA) was then performed to determine the weakness in the existing structure which ended up being at the weld joints. We then designed a set of brackets to span the weld joints and verified the increase in safety factor at these problem regions.